LUT University is taking its collaboration with inventor Jamie Hyneman a step further. As a newly appointed Professor of Practice, Hyneman aims to be strongly involved in practical development projects and research collaboration.

Inventor and product developer Jamie Hyneman, also known for his work on the TV show MythBusters, has been appointed as LUT University’s Professor of Practice for a five-year term from November 15, 2021 to November 14, 2026.

“I’m truly honored by the appointment. I am happy to help LUT by contributing what I know about technology and business and am looking forward to future projects and challenges,” Hyneman says.

Hyneman was awarded an honorary doctorate at LUT University in 2017. In addition, LUT named its prototype lab in Lappeenranta after him: the J. Hyneman Center (JHC) is a workshop where students can develop new ideas and solutions to problems and build and test prototypes. It is open to all students and staff members of the university group LUT Universities.

Encouraging students to tap into their creativity

Hyneman has been actively involved in projects at JHC since its foundation. He has weighed in on what technologies to select for the workshop, supervised student projects and helped students design an electric superbike and a telepresence robot that opens up new possibilities for distance learning.

“As a Professor of Practice, I plan to encourage and support student innovations at JHC. I also hope to participate in the university’s activity on a wider scale. For instance, environmental issues and different types of vehicles are especially close to my heart. These are things I’ve been delighted to find that LUT and I are very much aligned with,” Hyneman outlines.

“However, when it comes to innovation, you can never anticipate every possible aspect. In other words, I do not want to limit my collaboration with LUT by setting detailed goals. People understand what out-of-the-box thinking means, but if you are going to do that, you need to be able to move around competently both in and out of the box to actually be effective,” Hyneman adds.

LUT University is a community where curious people inspire others of their kind. Members of the LUT community influence the world in a new way: they question, come up with solutions to future problems and boldly show the way. According to Associate Professor Markku Ikävalko, Hyneman and LUT are a good fit.

“Hyneman is a bold entrepreneur and trailblazer who never tires of trying something new and developing the old. That's what we at LUT do every day,” Ikävalko analyzes.

Also Project Manager Terhi Virkki-Hatakka is eagerly looking forward to productive collaboration at JHC. She says Hyneman focuses on making things happen and going forward and does not dwell on his previous achievements.

“Cooperating with Jamie is very inspiring. He always seems to have good ideas or experiential knowledge of how to proceed,” Head of Development Marko Kasurinen says. 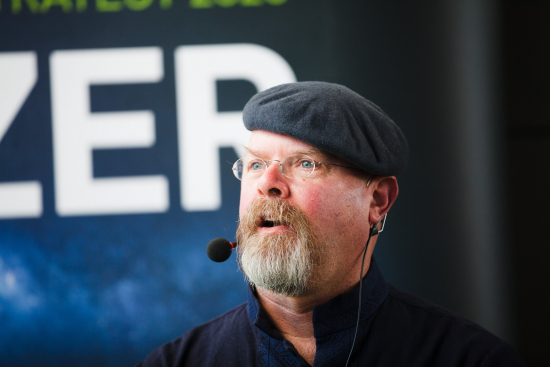 Clean energy, water and air are life-giving resources for which we at LUT University seek new solutions with our expertise in technology and business. We help society and businesses in their sustainable renewal. Our international community consists of 6 500 members. Our campuses are in Lappeenranta and Lahti, Finland. We are one of the world’s top 10 universities for climate action.