By decision of the Ministry of Finance, Mint of Finland will release a commemorative coin entitled ‘First Mark and Numismatics’ on 11 April. It is a homage to scholars and collectors of metal coins as well as commemorating the birth of Finland’s national currency. This is also the only Finnish gold coin to be struck in 2014.

The first Finnish mark was struck in silver at Mint of Finland on 15 October 1864. The ob-verse depicts the two-headed Russian eagle with the lion coat of arms of Finland on the shield at its centre.

The oak leaves and decorative ribbon encircling the silver mark’s reverse are repeated on the new ‘First Mark and Numismatics’ collector coin.

“This gold coin reminds us of the importance that nations traditionally attach to metal coins. The messages in metal convey the values of their era across centuries, even millennia,” says Henna Karjalainen, Communications Director at Mint of Finland and in charge of commemorative coins.

Finns have been collecting metal coins for more than 300 years

Metal coins have been an object of study and collecting in Finland at least since the 18th century.

“Finland’s first numismatic publication was published in 1745. The coin and medal collec-tion of the Academy in Turku was begun in 1747, and the first known private collections also started in the 18th century,” says Tuukka Talvio, keeper of the Coin Cabinet at the Finnish National Museum.

Today, Finns of all ages collect and study coins.

“Coins seem to be something that appeal across the board. We have a regular flow of visitors at our plant shop, from children to adults. Many Finns closely inspect what the coins in their pockets actually have on them,” says Henna Karjalainen.

The status of this commemorative coin is confirmed by a Decree of the Ministry of Finance. This Decree declares the gold coin legal tender in Finland. However, gold coins are of negligible importance as actual means of payment, since their purchase price is far greater than their face value. But gold coins have been important payment instruments throughout history.

“Gold coins were the currency of choice for major transactions in Finland in the Middle Ages. For instance, we know a townhouse was sold for 200 English gold nobles in Turku in 1426. That would have been almost 1.5 kg of gold,” says Tuukka Talvio.

The Decree on the ‘First Mark and Numismatics’ commemorative coin can be accessed here (in Finnish): http://www.finlex.fi/fi/laki/alkup/2014/20140210.

The only Finnish gold coin to be struck in 2014 has a gold content of Au 917 and a maxi-mum mintage of 6,000. The coin is 22 mm diameter and 5.65 g in weight and is finished to proof quality. The coin was designed by artist Hannu Veijalainen.

The ‘First Mark and Numismatics’ commemorative coin will be released on 11 April. The numbered special edition of the coin is only available by booking at the Mint of Finland customer service, tel. (09) 8943 4343, weekdays 09.00–15.00 from 11 April. 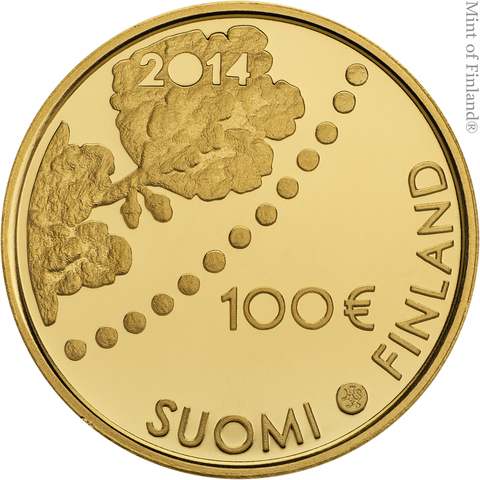 Mint of Finland Group designs, markets and manufactures metal coins, blanks, and collector and gift coins along with coin sets. Mint of Finland Group is the strongest mint in the Eurozone as well as one of the biggest exporters of coins worldwide. The company is owned by the Republic of Finland. Saxonia Mint of Finland is a subsidiary of Mint of Finland. You can see how coins are produced at the About a Coin exhibition at the Heureka Science Centre. For more information about the 2014 events, please visit www.suomenrahapaja.fi