Re-using the deepest base metal mine in Europe enhances Finnish renewable energy and climate strategies.  According to a feasibility study report made by Pöyry Energy GmbH this unique project can now be realized.

Energy Storage in Mine project financed by the Northern Ostrobothnia Centre for Economic Development, Transport and the Environment (ELY Centers) shows that the underground energy storage plant can be put into practice after the mine closure in late 2019. The concept which is based on pumped hydroelectric energy, closed water circulation and existing mine infrastructure in the 1400 meters depth of the Pyhäsalmi Mine, have “no impact” on the environment. In pumping mode, electric energy is converted to potential energy and stored in the form of water at an upper elevation. Pumping the water uphill for temporary storage “recharges the battery”. Pyhäjärvi energy storage explained in a video here.

The estimated construction time of the plant will be 3 years and its operational lifetime more than 50 years. Based on the economic analysis and market modelling of Pöyry Energy GmbH, 75 MW electrical power and 530 MWh capacity would be the most profitable. Installed capacity from 50 MW to 400 MW has been studied.

Pyhäjärvi’s “water battery” is based on mature technology used in more than 96 % of world’s energy storages. In addition to its long operational lifetime, generous size of the energy storage (7 h), high volume of the water reservoir (162 000 m3) and great effectiveness (77 %), it has minimal operating costs with limited maintenance and replacement investments.

Distribution of potential income streams from total multimarket trading potential could be 9,5M€/year for 75 MW installation according to the study by VTT Technical Research Centre of Finland.

Finland will begin exploring the possibility of phasing out the use of coal in energy production five years ahead of schedule, by 2025, reveals Kimmo Tiilikainen (Centre), the Minister of the Environment, Energy and Housing. Finland’s coal use, he adds, currently falls in its entirety within the scope of the emissions trading scheme of the EU. Because most low-carbon electricity resources cannot flexibly adjust their output to match fluctuating power demands, there is an increasing need for electricity storages in Finland.

Pyhäjärvi’s plant has the advantage of being able to positively impact all three elements of the energy trilemma: reliability, affordability and emissions reduction. Other technologies such as batteries can meet some but not all aspects. Pumped storage hydropower enables greater integration of other renewables especially wind and solar into the grid by utilizing excess generation, and being ready to produce power during low wind and solar generation periods. It also has the ability to quickly ramp electricity generation up in response to periods of peak demand.

Energy Storage in Mine A

Energy Storage in Mine A

Energy Storage in Mine B

Energy Storage in Mine B 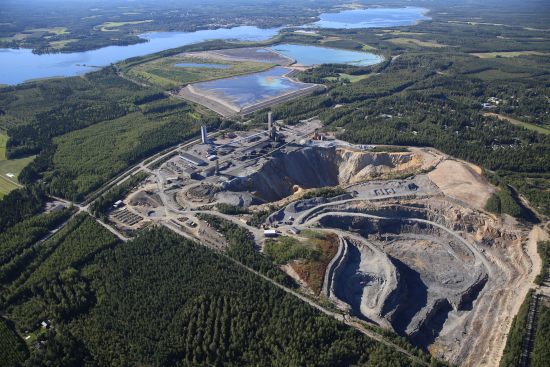 Callio Pyhäjärvi is a globally unique multidisciplinary operating environment. It offers a diverse range of opportunities for success for new and innovative projects and established operators seeking new horizons alike, as well as for training and R&D. Callio is located in the Pyhäsalmi Mine, 1,445 metres underground, and the surrounding areas. The facilities of Callio are located in one of the deepest known places in Europe. When mining activities end, Callio will provide businesses with a unique, safe and stable – even when measured against the most stringent global indicators – environment to start or expand successful business. The unique nature of the operating environment will be a valuable asset to businesses located at Callio. For training and R&D, Callio offers an underground laboratory and testing environment that cannot be found anywhere else. In fact, the infrastructure of Callio has already been used for versatile research for dozens of years. The facilities also allow for extensive experiments.

Town Pyhäjäris situated in the middle of Finland, 450 km north of Helsinki, and within close distance from collaborating universities – University of Oulu (160 km), University of Eastern Finland (150 km), University of Jyväskylä (180 km). The town, which have 5 500 inhabitants, is named after lake Pyhäjärvi, a lake of 125 square kilometers and rich in fish. Pyhäjärvi is well situated in an intersection of transport services. The town is in the junction of highways E75 and 27. There are five airports within two hours’ drive, with international airport of Oulu being second most serviced in Finland. The railway connections are excellent. Heavy/large components and bulk materials can be easily railed to the