There were approximately 3.22 million visits to Finnish national parks in 2019, which means a 2% growth over the previous year. The impact of national park visitor spending on local communities has also increased 3.7%, currently amounting to over EUR 219 million. Growth rates have varied in different years, but the growth trend has continued for over 15 years. The figures show that the additional funding received by Parks & Wildlife Finland from the state budget clearly provides societal added value.

There were 274,400 visits in state-owned hiking areas, which is 4% more than in the previous year. In addition, there were 802,300 visits to historical sites, an increase of 3% from the previous year. The number of visits to other popular nature sites has also increased. The total number of visits to all Parks & Wildlife Finland’s areas and nature centres is over 8 million. All growth figures are an indication of an increase in the popularity of nature tourism and nature recreation as well as a diversification of site use.

"The number of visits has increased continuously, but our financial framework has been declining. Had this development continued, the number of visits and the resulting positive societal impacts would have started to decline. The sustainability of use and customer safety would also have been tested if we could not afford to maintain the services. For this reason, we are grateful for the permanent increase in the funding level of Parks & Wildlife Finland and for the future investment funding aimed at development. We are able to ensure the sustainability of use and make sure that hiking services are in order,” says Timo Tanninen, Director of Parks & Wildlife Finland.

Many reasons for customer satisfaction

“With the additional funding, we can improve the services of these most popular sites and solve traffic congestion problems. We also hope that, especially in the vicinity of large cities, municipalities will start developing public transport to national parks and other popular nature sites. The public transport solution for the Kurjenrahka National Park in Finland Proper is a great example of this. On the other hand, the Helsinki Metropolitan Area has suffered from congestion with the national parks of Nuuksio and Sipoonkorpi, which absolutely requires functional public transport solutions,” says Tanninen.

There are many reasons for the popularity of nature and historical sites. The key is that the importance of these sites has increased in both domestic and international tourism, together with the awareness of nature's health impacts. In addition, Metsähallitus has built routes in popular national parks during the winter season and developed services that support summer activities, which is reflected in the increase of summer tourism. In the case of historical sites, growth is the highest in the vicinity of large cities. These growth trends are expected to continue.

The overall income impact of visitors on local economies has continued to increase. The impacts of national parks were EUR 219.3 million, which is 3.7% higher than in the previous year *. In the 63 nature reserves covered by the monitoring, the total impact of the revenue from visitors was EUR 321.9 million. The positive development in economics and employment is the result of a well-functioning partnership between tourism companies and Metsähallitus’ Parks & Wildlife Finland.

The visitors estimated the monetary value of the benefits that they experienced for their health and well-being at about EUR 100 per visit**. According to visitor surveys, the benefits for mental well-being is emphasised especially in nature areas and on cultural heritage sites. Areas that are valuable in terms of natural diversity and rich in cultural heritage are good for our minds.

National parks also move people diversely. For example, according to a visitor survey conducted in Koli in 2019, customers moved more than one million kilometres by muscle in the national park. Alongside traditional hiking, paddling and skiing, new activities have emerged, such as mountain biking, trail running and tour skating. The versatile possibilities of recreational and physical activities in the national parks offer opportunities for, for example, children and young people whose nature connection is just starting to develop.

* The coefficients used to calculate the local economic impact have been updated. Report online at: julkaisut.metsa.fi/julkaisut/show/2413 (in Finnish, documentation page in English)
** the number is the median of the answers. 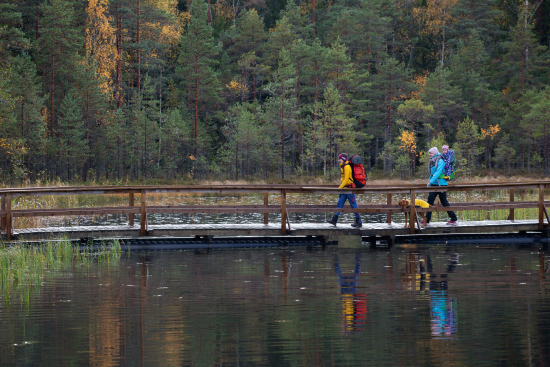 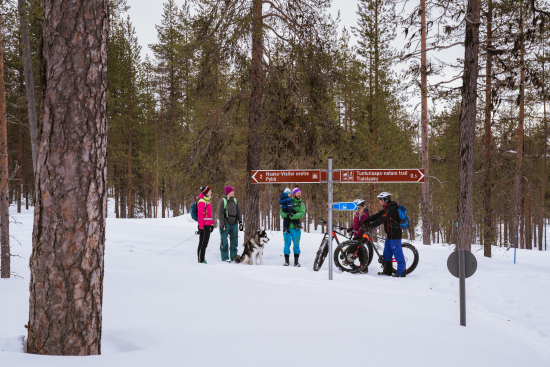 Parks & Wildlife Finland is a unit within Metsähallitus, comprising of National Parks Finland and Wildlife Service Finland. We protect and manage Finland´s nature and provide outdoor recreation services for hikers, hunters and fishers. We take care of national parks and other state-owned protected areas as well as many historical sites. We supervise hunting and fishing and sell hunting and fishing permits.