Roundwood removals decreased from the record year of 2018

The volume of industrial roundwood felled second-largest in history

“The volume of wood felled decreased from the record year of 2018 by nine per cent, or by 6.1 million cubic metres. The volume of logs harvested decreased by 12 per cent and that of pulpwood by seven per cent,” says Tiina Sauvula-Seppälä, senior statistician at Luke.

The volume of roundwood felled decreased by eight per cent

“The total volume of roundwood felled decreased from the previous year by 6.4 million cubic metres, or by eight per cent. That was a big decrease, but in practice, it meant returning to the level preceding the record year of 2018,” says Jukka Torvelainen, senior statistician at Luke.

Nine tenths of the felling potential in use

The forest inventory and planning team of Luke estimated in February 2020 that the sustained yield of our forests is during the current ten-year period of 2016–2025 on average 80.5 million cubic metres of roundwood per year.

“Of this estimated potential, 97 per cent was utilised in the whole country during the record harvest year of 2018. According to preliminary data, that share decreased to 89 per cent in 2019 and on average 91 per cent between 2016–2019. However, the volume of harvesting has varied s lot from one region to the next,” Torvelainen says.

The harvesting and drain figures shown here are preliminary. The final regional statistics for 2019 will be published in June.

Statistics and sources of information 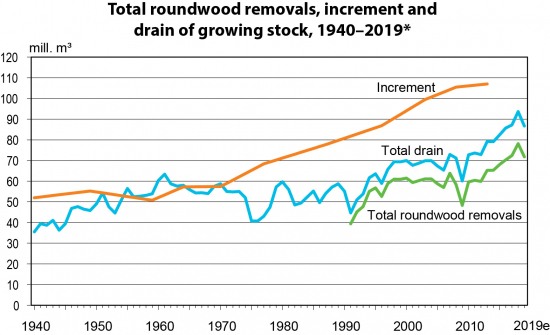