More domestic rye available than what is needed by industries

According to recent statistics of the Natural Resources Institute Finland (Luke), farms sold a total of 1.8 billion kilos of cereals in 2019. Rye only accounts for 6% of the total sales volume, while being enough to cover our food industry’s needs. At the end of 2019, commercial rye stocks were higher than ever before during the decade. Last year, average prices of cereals were slightly lower than in the previous year.

In 2019, Finnish industries and grain distributors bought a total of 1.8 billion kilos of cereals directly from farms – as much as in the previous year.

“Barley made up the highest proportion, i.e. more than one third. The oat volume transferred to the markets was 559 million kilos, 85 million kilos less than in the previous year. Wheat purchases also decreased from the year before to 427 million kilos. The rye volume was 100 million kilos, being enough to cover its annual consumption,” says senior statistician Sirpa Karppinen.

Finnish industries consumed more than 1.3 billion kilos of domestic and imported cereals in 2019. The food industry consumed one third of the total cereal volume, the feed industry nearly half, while other industries accounted for the rest.

The use of cereals in the feed industry decreased by 2% from the previous year. The most significant change took place in the use of barley, up by 25%. Correspondingly, the use of wheat and oats as feed decreased.

Consumption of oats increasing in our food industry

Commercial cereal stockpiles at the lowest level in a decade

At the end of 2019, industrial and commercial stocks of cereals amounted to 500 million kilos of domestic and imported cereals, being one quarter lower than in the previous year and the lowest during the past 12 years.

More detailed information and tables related to the statistics are available from the Stat.luke.fi service. 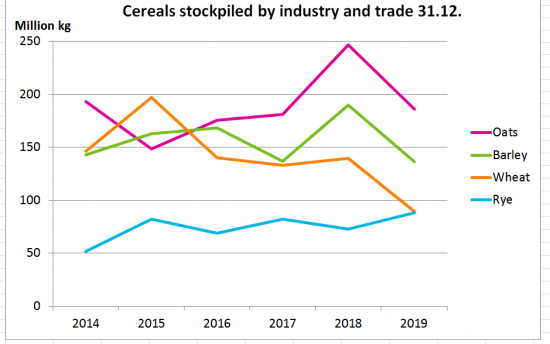 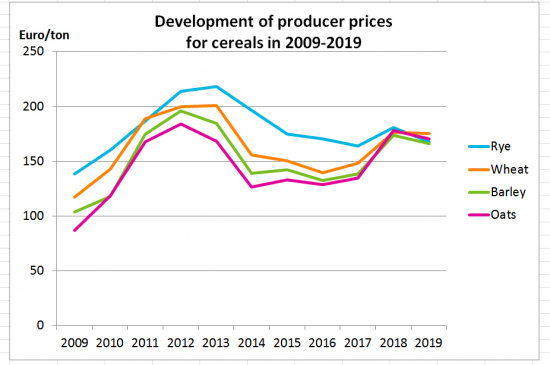