The City of Lappeenranta wants to be involved in the global efforts of companies in the region to mitigate climate change. The city has now started to support this by acquiring two solar-powered cookers from the Lappeenranta-based company Afstor Oy. The cookers will be delivered to a village without electricity in Africa, where wood is burned as an energy source for cooking, among other things.

The City of Lappeenranta is expanding its Greenreality activities from its own municipality to a global scale. By exporting solutions provided by local businesses that slow down climate change to the world, the city supports the climate handprint of companies in the region while also reducing its own footprint, says Kimmo Jarva, Mayor of Lappeenranta.

− In this way, we can participate in development work, support local entrepreneurship and promote sustainable development measures. In terms of magnitude, the purchase of these solar-powered cookers is equivalent to the air travel emissions caused by the city’s personnel in 2019, for example.

Climate pioneers are constantly expected to have a vision and actions that are broader than their own city. With regard to the solar cooker, we want to be involved in promoting both global sustainable development work and social well-being in Africa, says the city’s Development Manager Markku Heinonen.

− We want to show both the EU and national development cooperation that the idea of a Lappeenranta-based company really works in practical conditions as well.

The production of solar cookers began when Lappeenranta-based entrepreneur Ari Piispanen read a scientific article according to which afforestation in Africa would be the solution to the global climate change problem. Piispanen started to develop the idea and solution together with the professor of energy efficiency Jero Ahola. The result was the company Afstor and solar-powered cookers.

In Africa alone, 600 million people live without electricity and wood is burned as an energy source for cooking. A family of five burns about 4,000 kg of wood per year, producing 6.4 tonnes of CO2 emissions. In addition, collecting firewood is labour-consuming for the family, Piispanen says.

− The cooker benefits families and residents in vulnerable areas substantially. They used to collect wood all day long, but can now make better use of this time. They are able to work for afforestation organisations and receive a salary. This also gives children and young people the opportunity to study, as they do not need to be collecting wood. The cooker also provides them with electricity for lighting as well as with power for phones and tablets.

The climate benefit generated by the solar cooker can be observed using a monitoring system. The cooker’s operating hour meter shows how much it has been used. On this basis, it is possible to calculate how much the burning of wood and CO2 emissions have been reduced. 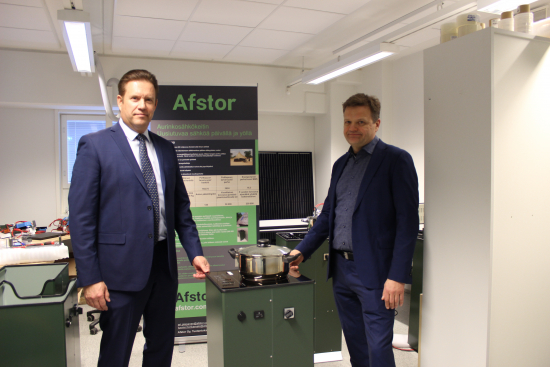 Lappeenranta is a pioneer city in renewable energy and clean environments with passionate problem-solving at its forte. We are the climate capital of Finland full of high energy, out-of-the-box thinking and international expertise. In our university and tourist center, located in logistically important region in South-East Finland, near the border between the EU and Russia, we dare and do. The Lappeenranta-Lahti University of Technology (LUT), the innovative operating environment, skilled workforce and good networks in a city of around 73,000 residents make it easier to start up and expand international business operations. Lappeenranta is easy to reach thanks to its international airport. www.lappeenranta.fi