The Flying Dutchman has landed in Finland.

Ronald de Waal,  founder of  Diamond Beer, has made a come back to the beer business in Finland.

After selling his company Diamond Beer in 2008 he returns to the beer market with his new company     The Flying Dutchman Nomad Brewing Company.

Living some years as a Nomad, traveling through many different countries he decided to follow his heart and return to his passion for beers. The love for beer has been in is blood for many years. Before he moved to Finland he worked as a brewer in the first craft brewery in Holland. After moving to Finland he had his first experience as a gypsy brewer in the year 1994.  Some years later he established Diamond Beer which became one of the leading import companies for craft beers in Finland.

Ronald was awarded in the year 2005 for the impact he has had on the Finnish beer culture.

This time Ronald will be the true Nomad Brewer. A Flying Dutchman as he was called already in the early ninety’s. Dreaming recipes and crafting beer in different breweries. Now the first beers have arrived into Finland:

This IPA is hopped with 3 American hops and matured on a bed of American Oak Chips. This beer has a very fresh hop flavour with citrus and piney notes. The wood  gives a great depth to this IPA.

Powerful hopped  with American and Australian hops. Matured on a bed of Hibiscus flowers which gives a nice tart aftertaste and a flowerish bouqet.

More Dry and Sour Than Your Mother in Law SAISON:

Belgium farmhouse yeast is fermenting this beer into a very crispy beer. Dry and a bit sour, spiced with Orange peel, Grains of Paradise and coriander. Hopped with Japanese Sorachi Ace hops and American Citra hops for a very fresh citrus flavour.

More Complicated Than Your Girlfriend STOUT:

Matured on American Oak. No wonder this beer is more complicated than your girlfriend.

The Flying Dutchman’s beers are available in bars, supermarkets and Alko.

Importer for Finland is Diamond Beverages. 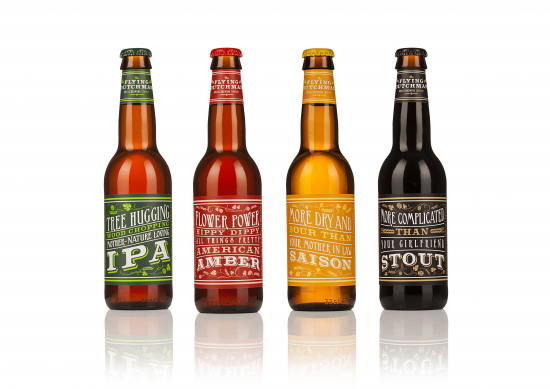