This Air Guitar Year will be one of a kind

Interest towards the Air Guitar World Championships held already for the 23 time in Oulu, Finland has been intense. Spots for the Dark Horses’ qualifications and orientation day "Airientation" were reserved in such time it has not seen before. It took less than two weeks for the spots to be gone.

Dark Horses' Qualifications attracted attendees from Japan, Germany, France, Australia, USA, Canada, Taiwan and Finland, altogether of 27 eager competitors. The air guitarists will rock the stage of 45 Special on 23rd of August, of which the honored jury will choose the lucky rockers for the next day’s World Final.

On the stage special characters will be seen, when the oldest air guitarist Bob “Mr. Bob” Wagner, 75, gives a visit from Canada and the own boy of Oulu, Aapo Ratio, 18, makes a comeback to the air guitar stage. All the interested ones couldn’t make it to this year’s event, but we courage all the applicants to come to enjoy the atmosphere and apply again next year.

The scale of the characters in both Dark Horses’ qualifications and the World Final is very wide, including attendees from all over the world and the hometown of the phenomenon, and with all kinds of nationalities and ages. The confirmed finalists attend as national winners from the USA, Canada, Japan, Germany, Great Britain and Australia. The latter two countries are new to the official Air Guitar network.

Only the performers know what the one-minute performance will include, but the sure thing is, there won’t be lacking energy on the stage.

The World final at Rotuaari square on August 24th is free of charge and has no age limits. VIP tickets are sold at the event's webshop. 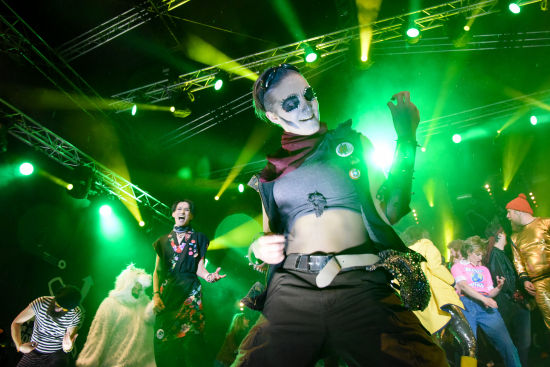 For Peace, From Oulu.