The Critical Tide exhibition, which combines design and research, will open at the Design Museum’s Gallery in September during the Helsinki Design Week. The exhibition brings together projects and works that explore the sea and the potential for positive impact through design. Critical Tide will combine research, activism and community engagement within the exhibition space.

At a time of deep ecological crises, Critical Tide will open our eyes to the urgent issues our oceans face and showcase creative ways of intervening. The exhibition challenges visitors to experiment, learn and immerse themselves while calling for a complete redesign of our relationship with the seas.

“We are showing how design can act on the imperative for sustainability. Asking how can we as humans be more benign – do less harm – to the world we live in?” say the curators.

The exhibition was created by a multi-professional, international team: Julia Lohmann (designer and professor at Aalto University based in Helsinki), Pirjo Haikola (designer, scuba diving instructor and researcher at RMIT in Melbourne), Gillian Russell (designer, curator and researcher at Emily Carr University in Vancouver) and Gero Grundmann (designer and illustrator based in Helsinki).

Critical Tide exhibition includes a seaweed design laboratory, oil absorbent mats made of hair, and an Ocean Confessional booth for confessing sins against the seas – just to name a few. All the different projects exhibited raise awareness or intervene in marine ecosystems to make a positive impact towards sustainability.

“We set out to present a range of possibilities that enable visitors to actively engage with sustainability and the oceans.” the curators say.

Critical Tide casts a critical eye over a topical theme. People's co-existence with nature and other species has been intensively explored in current design practice. For example, the Broken Nature Triennale, which opened in Milan this spring, highlights the importance of design and creative solutions when exploring the interconnecting threads between species. The Ocean Plastics exhibition, which voices concerns about the intensification of plastic waste and its impacts in the oceans, has just opened in Gothenburg's Röhsska Museum of Design and Craft.

The Chief Curator of Design Museum Helsinki Suvi Saloniemi has noticed that exhibitions around the world are now examining the environmental crisis and questioning our relationship with the planet and its species – the importance of interspecies cooperation.

”This process of re-organizing the co-existence of different species will also inevitably change the position of design and designers. Exhibitions around the world are suggesting that designers and the design industry should start to be accountable to our planet instead of the market economy and trade. The works displayed at the Critical Tide are considering different ways design could be involved in the birth of a new human-ocean relationship" Saloniemi describes.

Critical Tide exhibition opens at the Helsinki Design Week 6 September and is open until 27 October 2019.

Aquatocene, by Slovenian artist Robertina Šebjanič investigates the phenomenon of underwater noise pollution created by humankind in the world’s seas and oceans. The sound compositions heard at the Critical Tide exhibition are a re-mix between the bioacoustics of marine life, the aquatic acoustics and the presence of human-generated noise in the world’s oceans and seas. Underwater noise effects a great number of marine life forms which depend on the sub-aquatic sonic environment to survive. The audio compositions of the subaquatic soundscape encourage us to reflect upon the anthropogenic sonic impact on the underwater habitat and marine life, as well as illuminate awareness and underscore the importance of maintaining safe sound environments for animals living in the world’s oceans, seas, lakes, and rivers.

The exhibition team has created an empathy exercise ‘Baltic Characters’. It examines how can we reconnect with the species that live beneath the waves, both intellectually and emotionally. The playful test explores ways in which we can nurture empathy and reconnect with the seas. The visitor can find out which species in the Baltic Sea resonates with them – and learn what you can do to safeguard its future. The test is illustrated by Gero Grundmann, a graphic artist, illustrator, and member of the exhibition team.

Julia Lohmann, RCA Alumni and a curator of the Critical Tide exhibition team, has worked with seaweed and developed it as a sustainable material for making since 2007. The Critical Tide Exhibition includes a seaweed design laboratory in which Lohmann builds objects from seaweed and introduces the Department of Seaweed community of practice. It connects designers and makers, researchers and scientists interested in algae as a sustainable resource for making. Throughout the exhibition, Lohmann and her team will work in the open workshop in the gallery every Wednesday.

Modular Artificial Reef Structure, MARS was designed by Alex Goad in 2013 to assist with coral reef restoration. Its ceramic surface is designed to house transplanted corals. Transplanted corals can be divided as they grow and eventually be planted to restore reefs that have been degraded. The system has won multiple awards and is installed on Summer Island in the Maldives to assist with their coral nursery.

According to the US Matter of Trust organization, around 4.9 million liters of oil spill into the sea in US territorial waters alone. Matter of Trust has developed mats and booms which can be used to clean up oil and grease from water bodies and water drainage systems. The mats are made of organic and renewable material – human and animal hair and fur, wool and feathers – which absorbs oil without further damaging the marine ecology.

Ocean Confessional is a booth where visitors can reveal the sins they have committed against the sea. They will write their confessions on slips of paper, which will be dropped into the sea at a public ceremony held on 26 October. The slips are made from a water-soluble paper, each containing a small amount of calcium carbonate. Calcium carbonate in the form of limestone or crushed bivalve shells has been added to lakes to stop acidification.

”This paper itself is not the solution. The paper acts as a mediator for individuals to create a more personal connection with seemingly out-of-reach environmental issues. In doing so, people are encouraged to think and behave in ways that can create long-term systemic change.” Canadian designers, Design Academy Eindhoven graduates Pete Fung and Samein Shamsher describe the project.

The Association of Finnish Lions Clubs and their The Lions for Clean Waters project has enabled the Ocean Confessional to be a part of the Critical Tide exhibition in Helsinki.

The Radical Ocean Futures project combines art with science and is led by Dr. Andrew Merrie of the Stockholm Resilience Centre, a research Institute of Stockholm University. The project presents four scientifically grounded narratives of potential futures for our global oceans. Combining scientific fact with creative speculation, the work prompts reflection and the application of imagination to the future oceans and how we might think more creatively and radically about the environmental challenges facing marine ecosystems. The work shown at the exhibition includes four brief scenarios presented through imagery and audio narration.

The plastics in the oceans take thousands of years to degrade, remaining in the environment to be broken up into ever-smaller fragments by ocean currents. The Sea Chair by Studio Swine (Super Wide Interdisciplinary New Explorers) is made entirely from plastic recovered from the seas. Together with local fishermen, the plastic is collected and made into a stool at sea. Studio Swine is an art collective established in 2011 by Alexander Groves (UK) and Azusa Murakami (JP).

Read more about the events programme of this exhibition here. 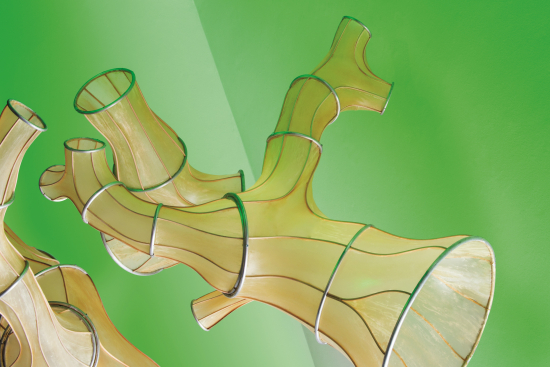