The respected Japanese artist Kaii Higashiyama (1908–1999) made a creatively fruitful trip to the Nordic countries in the spring and summer of 1962. While he was visiting Finland, the beautiful nature and exceptional midnight sun inspired him to depict the view that opened from the old Puijo Tower in Kuopio. Now a high-quality digital print of the painting has been placed in Puijo Tower Café.

The painting marks a century of diplomatic relations between Finland and Japan. A similar high-quality reproduction of Polar Summer Night is housed at the Finnish Embassy in Tokyo. At the Puijo Tower, the work is displayed amid the same scenery that inspired it.

"The public can experience the spiritual landscape that deeply affected the artist and, through him, the Japanese. I know that some people even moved to Finland because of this painting," says Heikki Mäenpää, a cross-media producer and musician who is an expert on Higashiyama.

Polar Summer Night is highly regarded in Japan, where the original is held as a national treasure at the Tokyo Museum of Modern Art (MOMAT). The work was painted in the traditional Japanese Nihonga style, which differs from oil painting in its use of natural materials and sharpness of detail. The details in the copy on display at the Puijo Tower are just as sharp as in the original.

The painting builds a kind of cultural bridge between Japan and Finland. The other copy of the work at the Finnish Embassy in Tokyo opens a view to Finland and Finnish nature. Visitors to the Embassy can be told Higashiyama's story, and that the landscape depicted can still be seen today from the Puijo Tower, just as it is shown in the picture – now alongside the work itself.

“Higashiyama's work symbolizes the strong century-old interaction between Finland and Japan in art and design. The work and its story wonderfully unite Finland and Japan. We are proud to be able to admire the work and tell its story to our guests at the Embassy of Finland in Tokyo, and it is wonderful that this can now also be done at the Puijo Tower,” said Pekka Orpana, the ambassador for Finland in Japan, in his greeting to the City of Kuopio.

The Finnish Embassy in Tokyo played an important role in getting high-quality digital print for both the Embassy and the City of Kuopio. Permission to have copies made was given by the Higashiyama family, who own the rights to the artist's works.

Polar Summer Night is on view to the public during the Puijo Tower Cafe's opening hours. Jukola Industries has turned the space into a complete work of art in harmony with the tower's nature-based interior design. 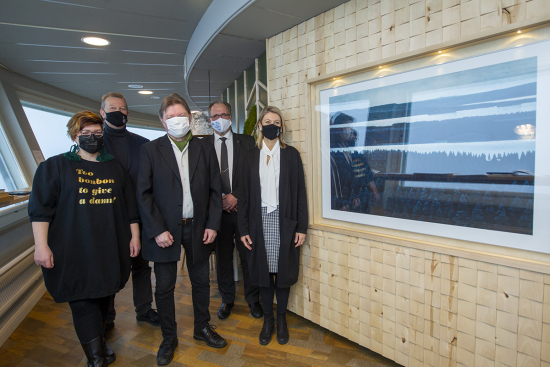 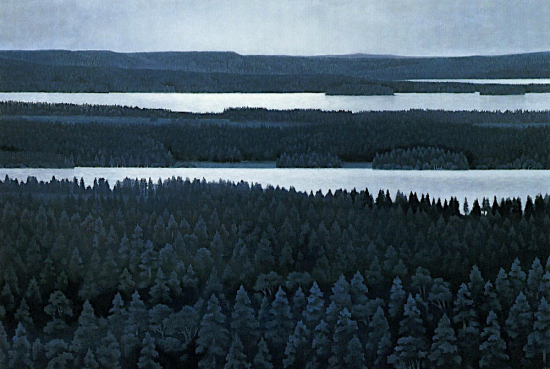